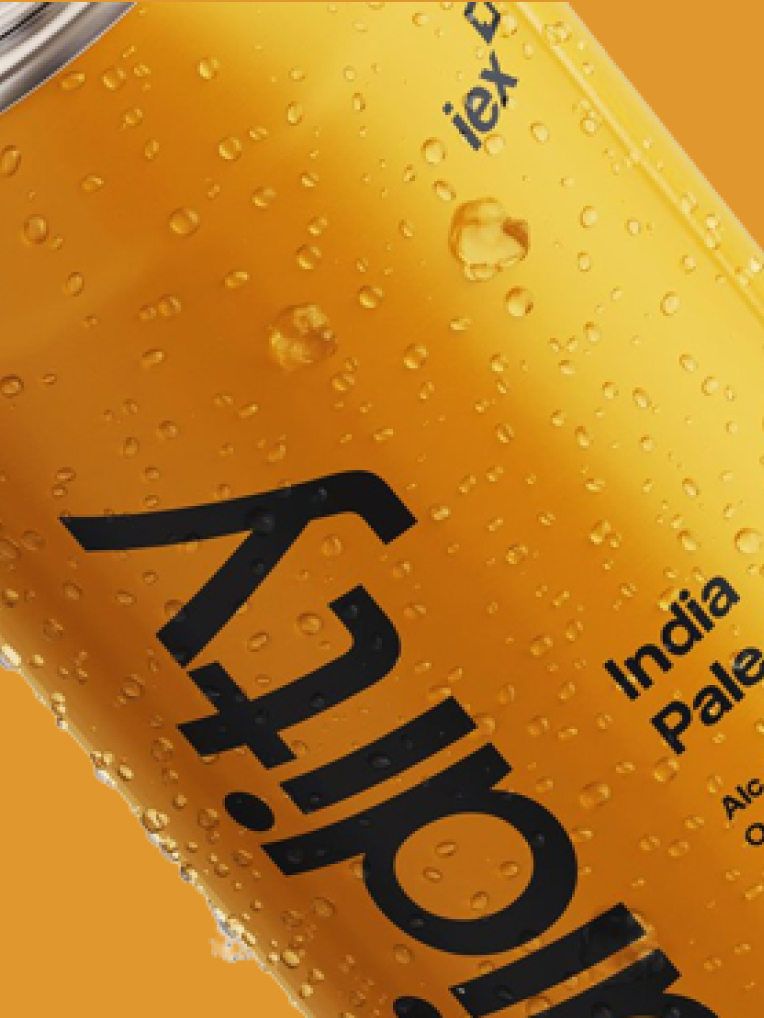 When industry competitors publicly questioned IEX’s “most liquidity” claim and suggested they were too small to make an impact anyway, IEX turned to Goods & Services to think of creative solutions to refute and debunk these challenges and raise brand awareness.

"Smart"
"Goods is smart enough to think of industry disrupting ideas, services, and campaigns, but also savvy and entrepreneurial enough to get things made."
— IEX Chief Marketing Officer
2X volume
Increase in daily trading volume from $10BB/day to $20BB/day
"Big play"
"One of two brands that stole the Superbowl show. IEX made a play (at the Superbowl) without spending a million dollars."
— AdWeek

“Creating a beer gave IEX a unique way to speak to people about its great liquidity. By simply creating a beer we created something much bigger —a conversation.”

In the financial world, “liquidity” means different things to different people. To individual companies, “accounting liquidity” refers to how much readily available cash they have on hand. To stockbrokers “market liquidity” is how easily a stock trades in the public markets. But, these days, thanks to the work we did with stock exchange IEX, we like to think “liquidity” simply means “beer.”

In the cutthroat arena that is the modern day stock market, IEX was founded in 2012 with the goal of leveling the financial playing field by operating in a more transparent and straightforward manner. One way IEX planned to achieve that goal was to provide the “best liquidity” in the industry, or, in simpler terms, make it easier—and therefore more profitable—for brokers to trade stocks. 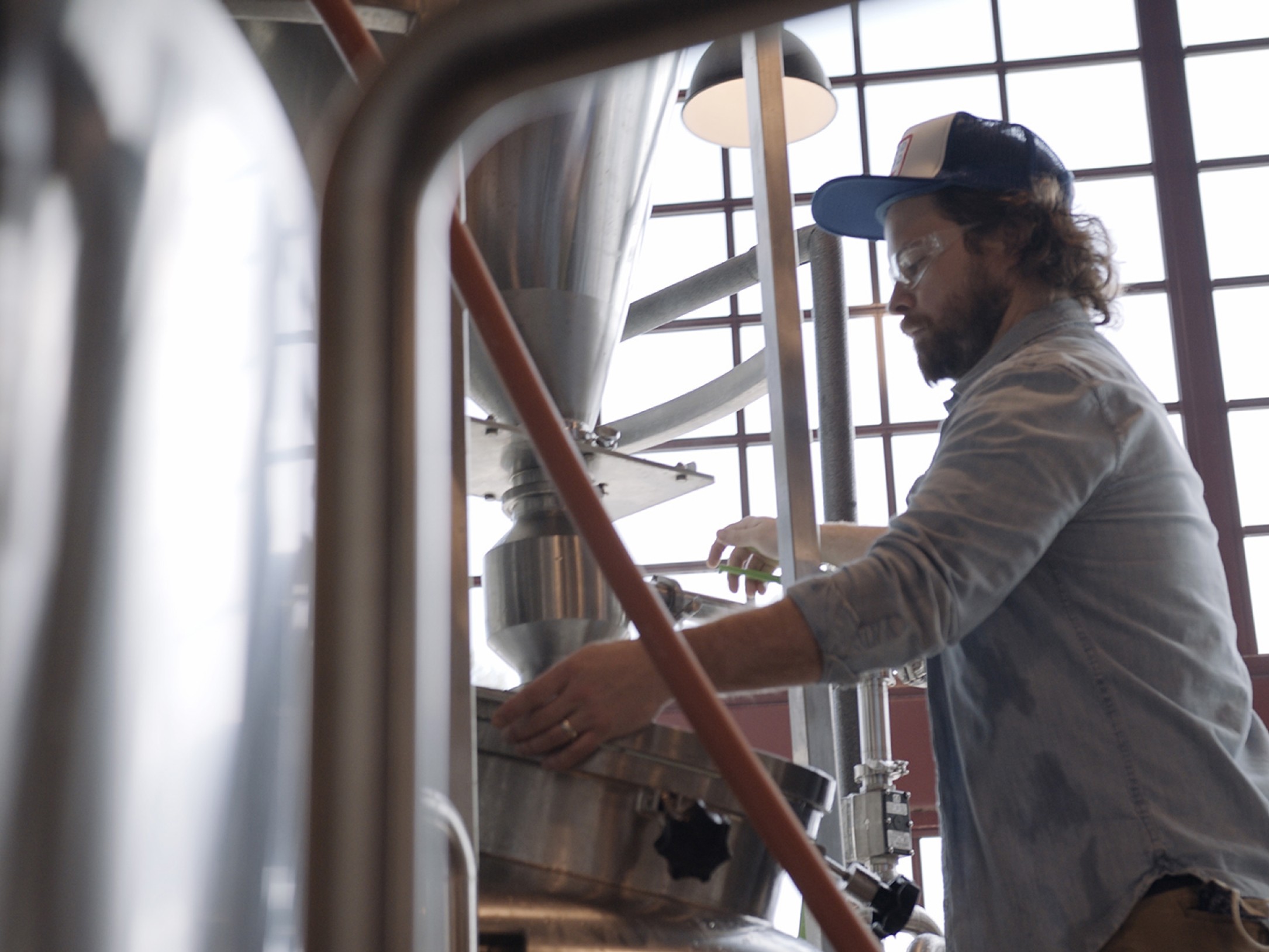 Apparently, other than the thrill of making money, there are fewer things stockbrokers love more in the world than sharing a beer. Not only is it a great team building lubricant and the preferred end-of-the-day wind down, it’s also the perfect excuse to invite a bunch of finance influencers and VIPS to the New York City Stock Exchange floor for a good old fashioned beer tasting. And so Liquidity beer was born.

Making a beer wasn’t just a fun way to get people to the party, it also acted as a conversation starter that led to dynamic, in-person discussions with key players in the industry about IEX and the validity of their “best liquidity” position. Introducing Liquidity beer was a clever way to literally put that liquidity into people’s hands. What a delicious idea.

As Graham Engebretsen, Managing Partner at Goods & Services said, “Creating a beer gave the IEX team a unique way to speak to people about their market advantages. By simply creating a beer we created something much bigger. A conversation.”

“There are a lot of creative groups out there, but Goods & Services is the only one I know that actually creates real tangible things. They’re smart enough to think of industry disrupting ideas, services, and campaigns, but also savvy and entrepreneurial enough to get things made. That’s extremely rare and a huge advantage for what we were trying to do at IEX..”

Not that there was anything simple about it. To actually make Liquidity beer come to life, we had some heavy lifting to do. We needed a name, a brand, a style of beer, a complete packaging system, and a roll out strategy. All while navigating the Covid pandemic.

And we didn’t want to just stop at a concept. We wanted to actually produce a quality beer and find a brewing partner willing to take on such a curious and small project. So we contacted our friends at Good Word Brewing in Atlanta who agreed to work with us on Liquidity (and Liquidity Lit and Dark versions)*

When Liquidity launched it made an immediate splash, not just at the beer tasting event, but in the financial industry at large by creating a surprising and buzz-worthy product to raise awareness for IEX.

Leveraging that buzz, we then sent gifts of Liquidity beer to key clients and invited them to post video of them opening their gift boxes on social media. We also created an e-commerce website where select recipients could order more Liquidity to share with friends and colleagues, or simply enjoy alone. 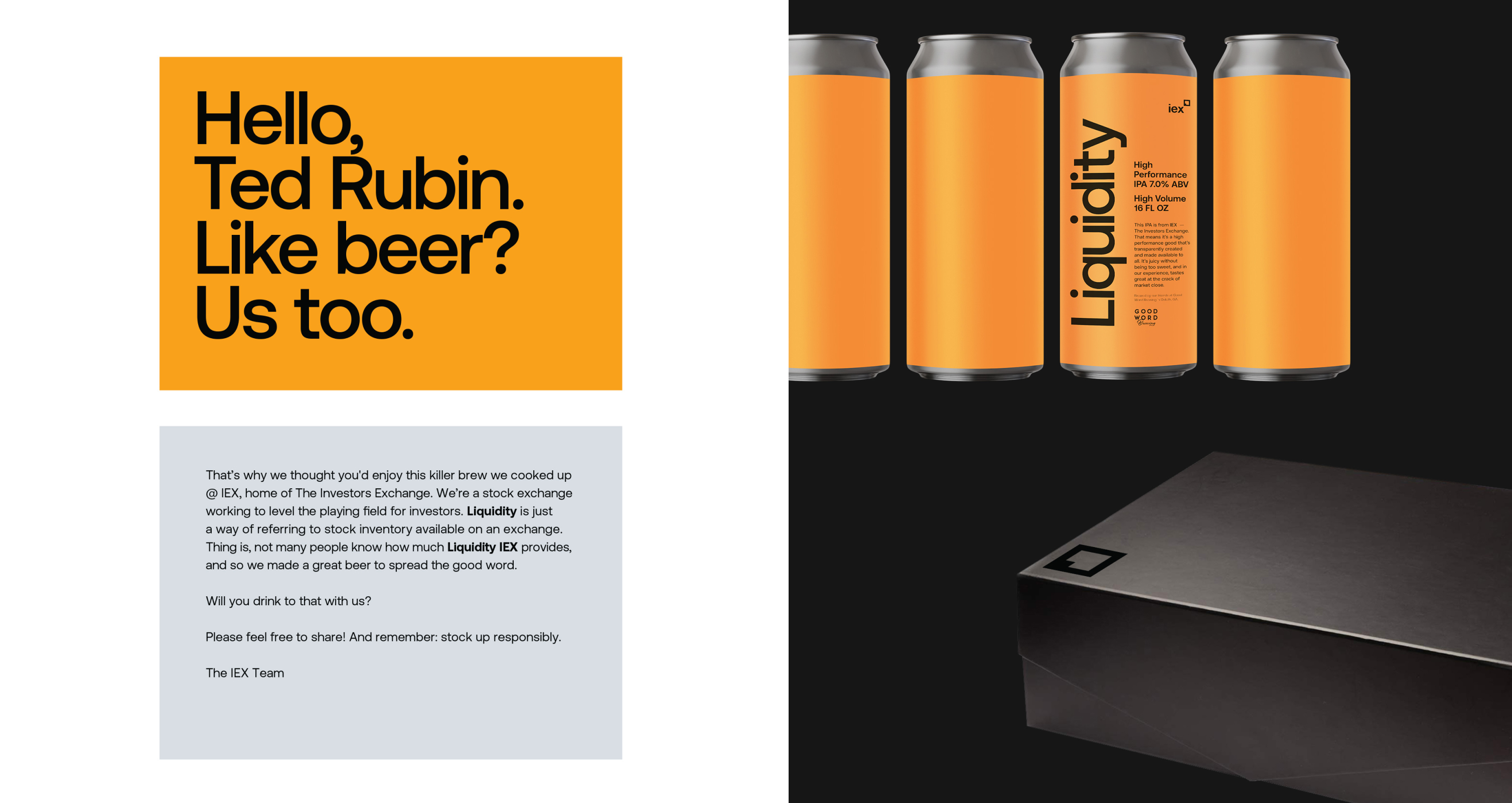 Tapping into the Big Game

To expand the conversation further and introduce Liquidity to an even broader audience, we decided to make a Super Bowl commercial. But without the multi-million dollar budget of most Super Bowl advertisers, and with just two weeks before the game, we knew we needed to get clever and fast. Ultimately we decided to create two online videos cheekily touting Liquidity beer’s “hops and smooth taste,” but also its “high participation rates, block percentage, and minimal slippage.” All while advising viewers to “Stock up responsibly.” Get it?

Essentially Liquidity beer was the best conversation starter imaginable, sparking a global viral response and putting the name IEX on the lips of every member of the financial markets community. In turn, the PR attention also spiked as IEX president Ronan was a popular interview subject for trade publications. Ryan even started a popular podcast, called Boxes and Lines, to discuss all things IEX’s.

More than twenty-thousand organic Youtube hits, 1 million views across email blasts and social media, and zero paid promotion later, it was official: both the beer and the overall Liquidity campaign huge hits. In fact, Liquidity was so hot, we eventually created a new product and launched another campaign for IEX another stockbroker favorite: D-Limit Hot Sauce (link). But that’s a tale for another day.

Liquidity beer is still being made and enjoyed today, and the conversation continues to grow. So you can see why in our minds, the term Liquidity simply means beer.

With every creative project there are results that can be measured with data and those that are more subjective. But in the case of this collaboration, IEX experienced a considerable measurable uptick in both qualitative and quantitive areas. IEX’s main goals were to raise awareness and increase positive sentiment toward the company, and, as their marketing team said, this campaign accomplished both of those in new and surprising ways.

* Liquidity beer is not for sale. It’s reserved especially for IEX’s friends and people they want to impress. If you think you’re one of those, send them an email and you can discuss it over a cold one.